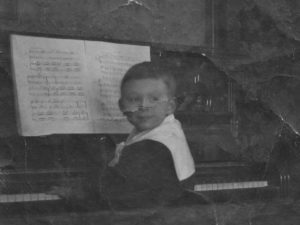 The first reference to James’ broadcasting career is found in the Leicester Mail dated 26/7/26 and he continued to broadcast regularly for many years up until the beginning of the war and throughout its duration.  Under the heading Tune in to Mr J. Ching, the report says ‘Listeners in and musical people generally will be interested to hear that Mr James Ching BA, Mus. Bac., Oxon, the well- known Leicester pianist and organist, has been asked by the British Broadcasting Corporation to take part in a special Bach concert to commemorate the anniversary of Bach’s death, on Wednesday next from the London Studio.  Mr Ching tells me he is playing the 5th Brandenburg Concerto with the wireless orchestra and also the whole of the French Suite.  He has also been engaged to play Bach Suites for a week in September.’

On 28th July 1926 the Times newspaper lists the broadcasting programmes listed for the day which include a performance of Bach Brandenburg Concerto No. 5 with James as the soloist.  The Leicester Mail reports on 21st September that he is to broadcast a fortnight of Bach Suites and Partitas the following March.

On 20th January 1927 the Leicester Mail gave notice of a Sunday afternoon broadcast by ‘that brilliant Leicester pianist Mr James Ching’ and the same broadcast was advertised in the Radio Times with a photo and a list of the music by Rameau and Brahms to be played at 4.15pm on Sunday 21st January. 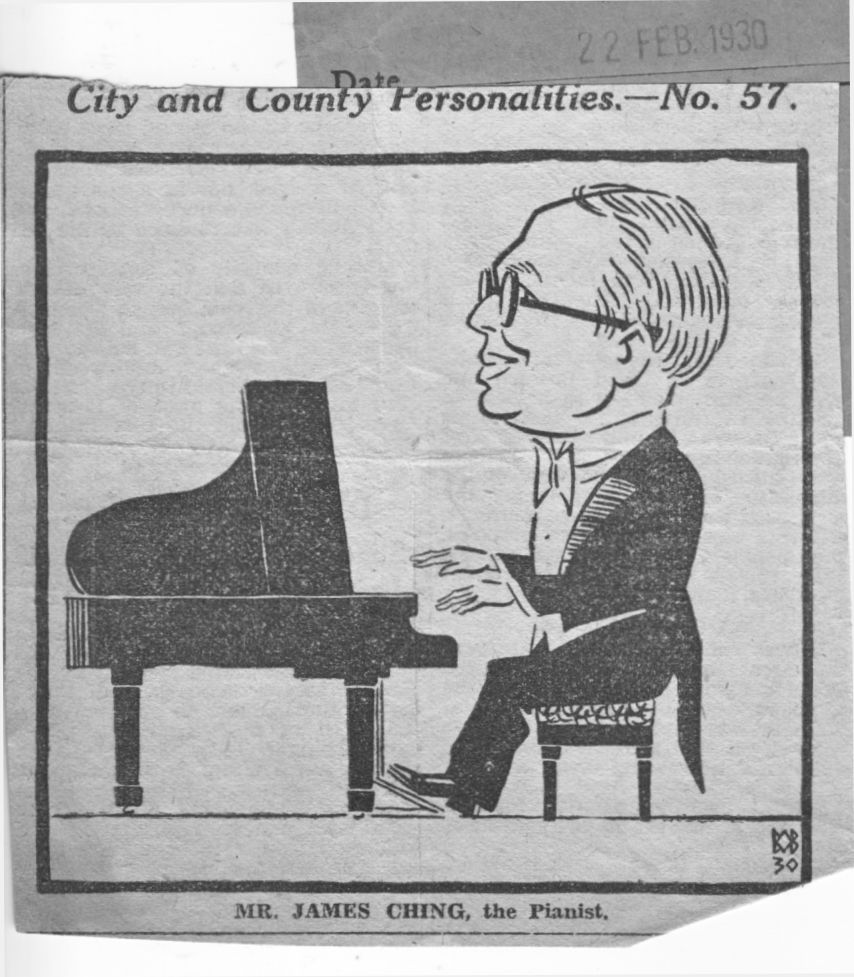 There is also a mention in the Leicester Mercury of ‘the well-known Leicester pianist, who was the subject of one of this week’s ‘Who is it?’ cartoons, is to broadcast from London tomorrow afternoon’.

The Daily Mail reports another broadcast on 22nd January under the heading Wireless Music:  Mr Frank Bridge’s Concert.  Mr Frank Bridge will conduct the most attractive of next week’s wireless concerts on Tuesday evening.  It is called a light symphony concert, but, while not heavy it is not at all trivial…..Mr James Ching, of the Royal Academy of Music, will play the piano solos at this concert.’

On 14th March 1927 the Leicester Mail reports that ‘Listeners-in will have the pleasure next week of hearing one of Leicester’s most accomplished musicians.  Mr S. James Ching, the well-known local pianist, is to broadcast from the London studio each evening at 7.15, selections from Bach.  It is also interesting to note that he is also to broadcast from Belfast on April 5th.  During this month he and his pupils are giving an invitation recital in Leicester.’  He was working from London and Leicester at this time and still teaching his local pupils.

The Radio Times for 4th March 1927 displays a photo of the young pianist, who was 27 at the time, under the heading of Bach: Some of his jolliest keyboard music played by James Ching.  The Times under its heading of Broadcasting shows that this recital of French Overture in B Minor is scheduled to be broadcast at 7.15pm.

The Daily Chronicle for 7th March lists Today’s Wireless Programmes: Who’s Who also features James Ching playing ‘the Jolliest keyboard music of Bach’ together with a photograph of him, one of only two artists featured this way.

On 8th March The Times lists a broadcast to be transmitted that night from London, Sheffield and other stations of the British Broadcasting Company which includes James Ching (pianoforte) Partita in B flat Major (Bach) at 7.15pm.

At this time he was performing Bach’s music live on air daily for the whole week.

The Daily Mail of 9th March reports at the top of the page that ‘Mr James Ching continues his series of extracts from Bach’s harpsichord music for wireless listeners tonight at 7.15’

The Glasgow Evening Citizen of 21st January 1930 under the heading of Wireless Music reports on one of the Foundations of Music broadcasts. ‘James Ching, one of the younger school of expert pianists, is well worth considering for a few minutes each evening in the Foundation of Music Series.  The Toccata and Fugues of Bach are listed for performances and Mr Ching’s style reminds one of the finger methods advocated by the great master himself. Mr Ching’s phrasing is delightful.  There is no mistaking the reappearance of main tunes, and we feel sure that the player is really enjoying his work, which of course makes for success.’

The Manchester Guardian of 4th January 1933 reports another broadcast in the same series.  The critic writes ‘Mr Ching gave eleven of the three part Inventions (Bach).  Most of these movements, even the florid ones, are reflective in expression, and Mr Ching played them with an intimacy of touch just suited to their quietly flowing tones.’

5. Compositions and Manuals on Piano Technique

From June 1926 James published series of musical compositions and manuals on piano playing which were well reviewed.  Three pieces:…

As well as broadcasting, James was also giving recitals in Paisley and Leicester.  The Glasgow Evening Times reviewed the Paisley…